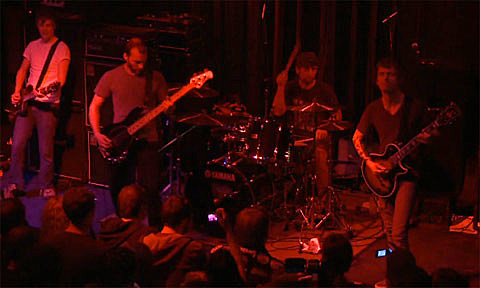 There are always casualties. Scion Rock Fest 2010 was incredible (review part 1 and part two), but like any festival, there will always be bands that you miss due to travel/scheduling/food/any number of other reasons. One band I missed on that overcast day in March was Pelican, who rocked a set at Skully's culled from their latest LP What We All Come To Need. Luckily, some pro-shot video from that show was recorded; view a pair of songs from that show (as well as an interview) below.

Pelican is celebrating their ten year anniversary in the coming months with a pair of shows in LA (with Goatsnake!) and Chicago. In addition, the band will release a limited-to-500 box set that will package the bands four LPs and three EPs for a 10xLP (!) set due via Viva Hate Records (the label responsible for that jaw-dropping Agalloch box set). More details on that box set are on the way.

Pelican "Strung Up From the Sky" at Scion Rock Fest 2010