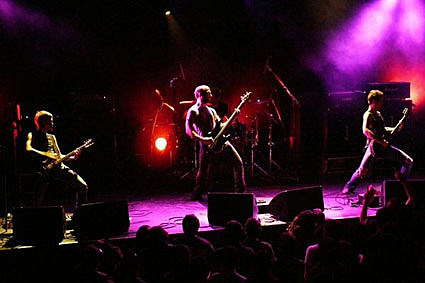 When you call your tour the 'Champions of Sound', you better be either a travelling reggae showcase or ready to ante the f up. Hopefully Pelican, Kayo Dot, and Stove Bredsky (aka Stephen Brodsky of Cave In) are up to the challenge when this eclectic tour of Hydra Head representatives goes east-coastin' in late October up 'til around Thanksgiving. Zozobra (with Caleb, also of Cave In lineage) are included in the festivities on a few dates. That includes the show at Bowery Ballroom on 11/2. Tickets go on sale Friday at noon.

Pelican is gearing up to tour Europe with Torche, and recently dropped a lengthy update including details on their new record.

In related Kayo Dot news, Toby Driver has reformed his former band, Maudlin of The Well after asking for donations to help record unreleased tracks and receiving a big fattie courtesy of one superfan. As a result, the band will hit the studio in Feb of 2009 to record a digital only release. No word on who Maudlin Of The Well is/will be, other than Toby (natch)and Terran Olson. All dates below...