Pentagram at The Power of the Riff East, 2012 (more by Greg Cristman) 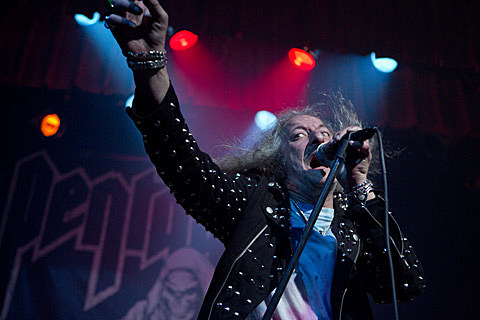 Pentagram, America's 40-plus-year-old doom institution, are heading back out on the road in October. The enduring dazers, now with guitar wiz Victor Griffin back in the fold, will be supported by Radio Moscow, Bang, and Kings Destroy. The tour will pass through places like Chicago, Cleveland, and Philadelphia, with possibly more dates to be announced in the near future. On November 1, they'll hit NYC's Gramercy Theatre with additional support from Blood Ceremony. Tickets will be surely be posted soon. The full list of dates appears below.

Fronted by the indefatigable and gonzo Bobby Liebling, star of the Last Days Here documentary, Pentagram have found themselves as elder statesmen in the American metal scene. Their last album, Last Rites, was released in 2011. As for their tourmates, hard-rockers Bang -- best known to relic collectors for their '71 self-titled album -- reformed this year to play a few US dates. Psych rockers Radio Moscow released their fourth album, Magical Dirt, back in June. Brooklyn stoner metallers Kings Destroy have found themselves on a number of bills, including earlier this month with Blackfinger and the upcoming Black Cobra and Lo-Pan show at Saint Vitus on September 18. And Canadian occult doomers Blood Ceremony cut the single Let It Come Down / Loving You in April.

All of the dates along with streams from the bands and the trailer for the Last Days Here documentary appear below. 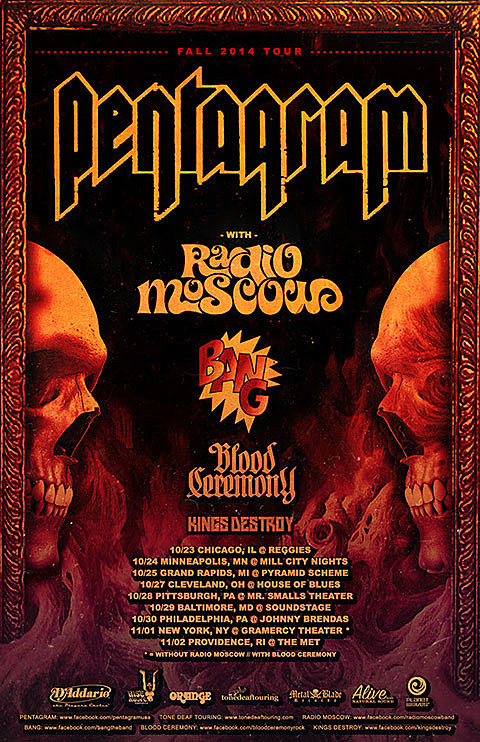