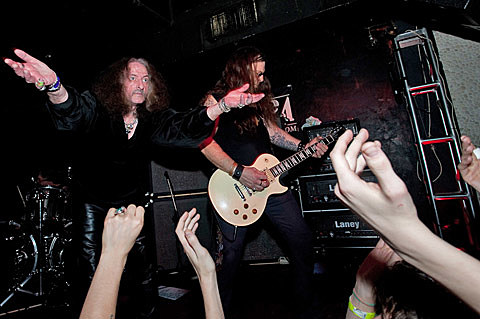 As discussed, Pentagram will play a string of shows with JEFF The Brotherhood & Valient Thorr. That tour has now been announced and will include a NYC show at Le Poisson Rouge on August 21st. Ticketing info is forthcoming. All dates are listed below.

Another date on the Pentagram schedule goes down on August 13th at Echo Park in LA aka the 2011 Power Of The Riff festival. The current lineup also includes Winter, Pelican, Trap Them, Masakari, Alpinist, Acephalix, All Pigs Must Die, and more TBA. Unlike last year, the fest costs money this time. Tickets are on sale. Poster below.

Discover the best in recent independent cinema with BAMcinématek's annual festival, collecting the most dynamic and innovative new work from festivals in the US and around the world and bringing them to New York City audiences. Now in its third year, BAMcinemaFest 2011 is our biggest festival yet, screening 26 feature films, including 20 New York premieres and one world premiere, as well as 24 short films, an outdoor screening, parties, live music, a photo exhibition, and more.

As previously mentioned, Gruff Rhys (Super Furry Animals) will be the focus of a film as well, as a screening of Seperado! on June 18th will chronicle his journey "from his native Cymru all the way to Patagonia to look for his long-lost Argentine uncle, the poncho-clad Welsh-Latin singer René Griffiths". Gruff Rhys returns to play NYC a few days before that, on June 15th at Mercury Lounge with Y Niwl and Brakes (Solo Acoustic). Tickets are still available.

In other news, JEFF The Brotherhood released a new video for "Hey Friend" from their forthcoming We Are The Champions. View that, and all tour dates below.

--
Hey Friend by JEFF The Brotherhood 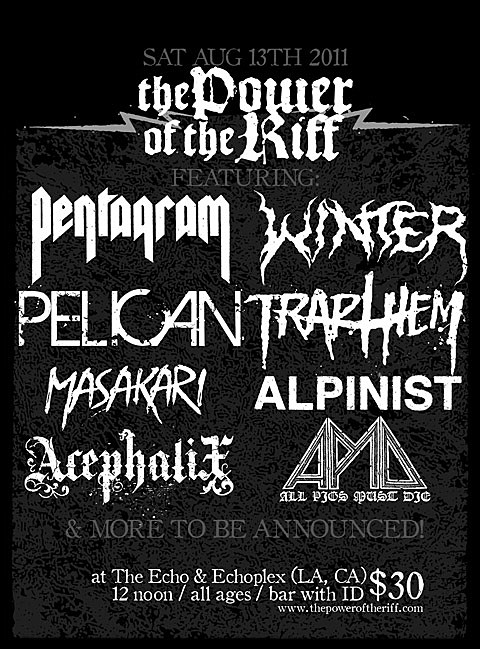 Filed Under: Acephalix, All Pigs Must Die, Alpinist, BAMCinefest, Bobby Liebling, Genesis Breyer P-Orridge, Gruff Rhys, Jeff the Brotherhood, Masakari, Pelican, Pentagram, Power of the Riff Festival, Thee Majesty, Trap Them, Valient Thorr, Winter
Categories: Music News, tour dates
Comments
Leave A Comment
Glacier Veins members tell us about their favorite albums of 2022
Our favorite songs of the week (playlist)
Winter tells us about the influences behind her shoegazy new album ‘What Kind of Blue Are You?’
Indie Basement (10/14): the week in classic indie, college rock, and more
Our favorite songs of the week (playlist)
Notable Releases of the Week (9/30)