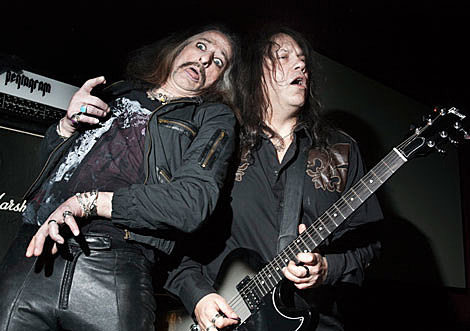 "Long-running D.C. doom legends PENTAGRAM, with riff-meister Victor Griffin back in the fold, will record their new album, "Last Rites", between November 29 and December 21 for a late March/early April release via Metal Blade Records. The effort will be a double-disc set consisting of the new studio album and a DVD of the band's performance at this year's Maryland Deathfest, which was held on May 28-30, 2010 at Sonar in Baltimore." [Blabbermouth]

A list of song titles are below, and Pentagram, whose current members are Bobby Liebling (Vocals), Victor Griffin (Guitar), Greg Turley (Bass), and Gary Isom of Spirit Caravan (Drums), will play Europa in Brooklyn on January 6th with the help of Hull, Judas Priestess and Bezoar. Tickets are on sale. The show will be Pentagram's first NYC appearance in close to a year. They played BB King's with The Gates of Slumber in on January 17, 2010.

The Gates of Slumber will enter England's Orgone Studios with Jaime Gomez Arellano (Ghost, Angel Witch) to work on their follow-up to Hymns of Blood and Thunder. Look for that LP this spring via Rise Above Records, and look for Gates at Roadburn 2011 along with all of the other jaw-dropping artists who are playing.

All Gates of Slumber dates, and some videos, below...

THE BRINGER OF WAR -- THE GATES OF SLUMBER