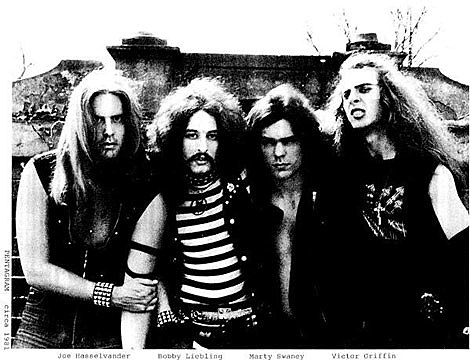 Ask any doom metal fan about the true pioneers of the genre and two bands will be mentioned: Black Sabbath and Pentagram. One of those bands is to take the stage on March 6, 2009 for a rare show at Webster Hall. It's the legendary Pentagram and tickets go on sale Friday at noon!

Pentagram... was quite prolific in the underground scene of the 1970s, producing many demos and rehearsal tapes, but did not release a full-length album until reforming in the early 1980s with an almost completely new lineup. Throughout the band's history the only constant member has been vocalist Bobby Liebling. The revolving lineup of Pentagram has featured many well respected musicians in the local doom metal scene... -[Wikipedia]

That "local" doom scene is in Maryland, which spawned MANY great doom-y bands including Clutch, Monster Magnet, Wino and his projects The Obsessed and Place Of Skulls (with a member of Pentagram), Earthride, and many many others.

Pentagram, and specifically Bobby Liebling will be the focus of a documentary via 914 films entitled "Last Rites: The Fall and Rise of Bobby Liebling". Here's a synopsis of the movie:

Cult rock legend Bobby Liebling has been churning out genre defining and highly admired hard rock / doom metal for over 36 yrs. Drug addiction, band break ups, bad record deals, jail terms, chronic illness, Satanic blood sacrifices and various acts of self destruction haven't haulted him as he continues to claw his way to the top. This film in progress will highlight the triumphs and downfalls of the life of an underground icon. Experience his daily struggle as he attempts to not only succeed but to survive.

Check out the documentary trailer featuring appearances by Hank III and Witchcraft, and a whole bunch of other videos, below...

"Last Rites: The Fall and Rise of Bobby Liebling" Trailer