People Get Ready at MHOW in 2013 (more by David Andrako) 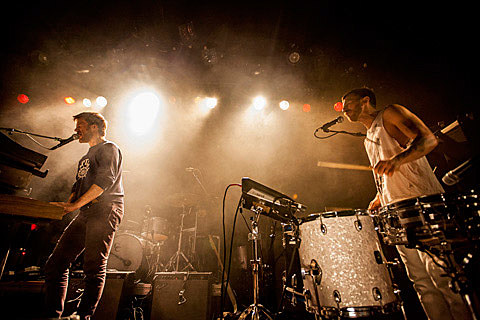 NYC pop collective People Get Ready, whose lineup includes current and former members of David Byrne's band, Yeasayer, A Sunny Day In Glasgow and others, and who just landed at #5 on Bob Boilen's Favorite Concerts of 2013 list for NPR (after making the #1 spot in 2012), have got a couple upcoming local shows in the near future. The first is a previously discussed Ecstatic Music Festival collaborative appearance with Lesley Flanigan at Merkin Concert Hall on February 19. Tickets for that show are still available.

Sooner than that, they'll play a more traditional show at Baby's All Right on Friday (1/10) with Shy Hunters. Tickets for that show are on sale now. At Jherek Bischoff's guest-filled show at St. Ann's Warehouse last night (1/8), where he was joined (among others) by People Get Ready's Jen Goma, he mentioned that he'd be sitting in with the band at the Baby's show on Friday.

Openers Shy Hunters can also be caught later in the month at The Rock Shop (1/30) with Brittany Campbell, Holy Ghost Machine Gun and unigen (tickets). They make art pop in the vein of Austra/Zola Jesus-via-Kate Bush, and you can stream a track of theirs below.

In related news, People Get Ready's Jen Goma is also a member of A Sunny Day In Glasgow, who mentioned in early 2013 that they were working on a Kickstarter-funded LP, and we've now gotten one step closer to that as the band have released a new song, "In Love With Useless (The Timeless Geometry In The Tradition Of Passing)." Stream that, along with People Get Ready and Shy Hunters streams and lists of dates, below...