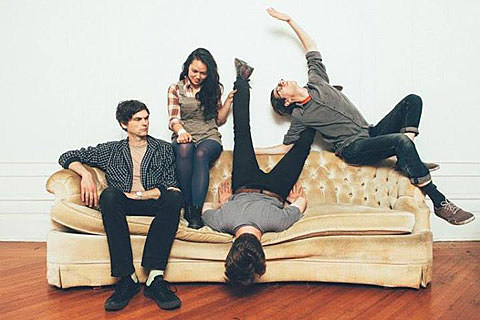 People Get Ready will release their new album, Physiques, on June 24 via Brassland. The album was made with Deerhoof's Greg Saunier in downtown Manhattan's Clocktower Gallery (which is now, sadly, being renovated for condos). The album's title track is the first single and you can stream that below.

Known for their occasional high-concept, choreographed live shows, People Get Ready are part of the 2014 River to River Festival's kickoff event on June 19 at Battery Park's North End Way which is a free afternoon show. After that, they'll play a record release show at Rough Trade on June 24. Tickets for that show go on sale Friday (4/25) at noon.

Sooner than that though, they'll play Union Pool on April 29 as part of Jolie Holland's residency at the venue. Tickets for that show are on sale now.

No other tour dates have been announced yet -- the band's Jen Goma is currently busy playing as part of The Pains of Being Pure at Heart who are on tour through May. More dates will hopefully be announced soon but meanwhile check out People Get Ready's new song below.