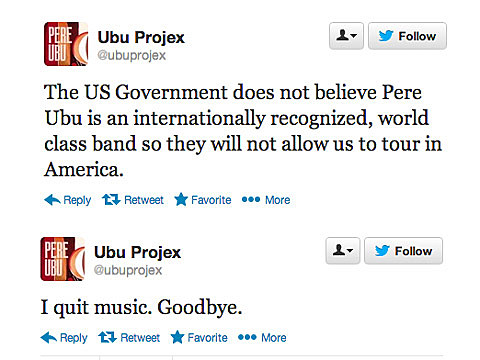 Hopefully the second tweet (above) from Pere Ubu isn't a real declaration. The band, who recently scheduled a North American tour that includes a stop in NYC at Bowery Ballroom on September 12, are suffering from the old Visa Issues, which is a little strange as they're an American band.

This stems from  the current line-up of the Cleveland post-punk icons, which includes a couple members who are not U.S. citizens. Frontman David Thomas explained further on the band's Facebook: "The only solution is to fire Moline and Dids and I ain't doing it. I am exhausted with paperwork and I don't care anymore."

Hopefully they can work it out. Fingers crossed.