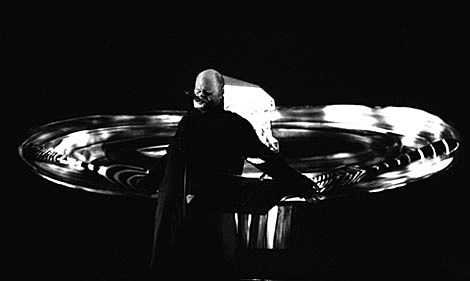 Pere Ubu, the long-running band fronted by singer David Thomas, will be making the US debut of their "Long Live Pére Ubu--The Spectacle" show at (Le) Poisson Rouge on Sunday, March 28th. Tickets are on sale

The adaptation of Alfred Jarry's 1896 play, which we mentioned when Thomas came to speak in NYC last December, has been performed around the UK and Europe over the past two years. It came out on CD last year and as a live radio show (part of which is up as a free downloadable podcast). Live, it's accompanied by animations from The Brothers Quay, which you can see below.

It's one of three unique shows the band has scheduled for March. On March 5th they'll be doing their landmark 1978 album The Modern Dance in its entirety at Cleveland's Beachland Ballroom, and on March 24th, they'll mix Modern Dance and Long Live Pére Ubu material for a show in Pittsburgh.

Thomas also writes that "Work has begun on the next Pere Ubu album. Working title: Lady From Shanghai. We are considering posting work-in-progress song demos at [Pere Ubu's online store] hearpen.com on a reasonable subscription basis. Final decision yet to be made."

The last time Pere Ubu played NYC was at the Knitting Factory in 2007.