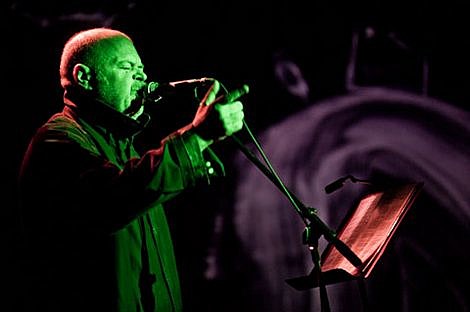 After David Thomas teamed back up with Rocket from the Tombs for a new album in 2011, he returned to his position as leader of art punk veterans Pere Ubu for a new album, Lady From Shanghai, which came out earlier this year via Fire records (their first since 2009's Long Live Pere Ubu). If you haven't been keeping up with the band's recent material, David Thomas is the only original member remaining, but they still sound genuinely great. There's nothing as instantly classic as say, "The Modern Dance," on the new record, but it's terrifically weird and underproduced for any band, let alone one 30+ years into their career. You can purchase the album at the Fire Records webstore, listen on Spotify, and download two tracks from it above or stream them below.

The band were recently announced for Raleigh's Hopscotch Festival, and it's since been revealed that they will be touring North America around that time. The tour brings them to NYC for a show on September 12 at Bowery Ballroom. Tickets for that show go on sale Friday (5/3) at noon with an AmEx presale starting Wednesday (5/1) at noon.

All currently known dates are listed, along with the song streams, below...