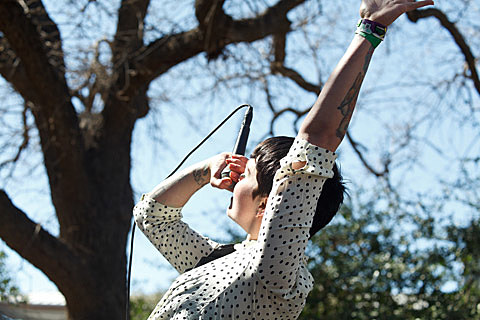 Syracuse noise punks Perfect Pussy are touring relentlessly this year in support of their debut album Say Yes to Love, and this weekend they return to NYC for two shows. First, they play the rowdy, all ages Death by Audio tonight (4/4) and then Mercury Lounge on Saturday (4/5). Both are sold out. Updated dates are listed below.

The band were also just interviewed by Human Serviette Nardwuar, which as you can imagine, gets pretty funny (especially when Nardwuar says, "you're gonna make me say... pussy!"). Meredith also talks about Lorde tweeting the lyrics to one of Perfect Pussy's songs: "It was really sweet because she's cool... she's cool." They also discuss Meredith's love for Ultramagnetic MCs, MxPx, Big Eyes and more.

As you may know, Perfect Pussy have only been a band for few months, but have quickly graduated from small basement shows to playing clubs like Mercury Lounge and the NPR showcase at SXSW. Before seeing them in one of those clubs this weekend though, you can revisit the early days with a video of one of the band's first shows in Philly from this past July. The crowd's packed tightly in, the ceiling is super low, oh yeah, and there's sparklers. Maybe it's not as legendary as say, an early Kraftwerk video, but you know.

Perfect Pussy at 4qhq in Philadelphia, July 10th, 2013 from Better Basements on Vimeo.