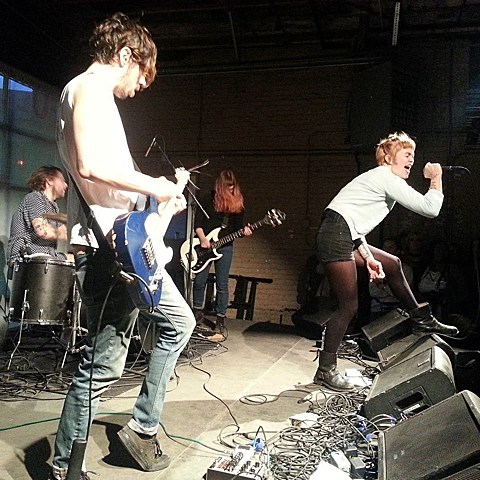 Two local bands who take influence from hardcore, Perfect Pussy and Big Ups, both just played a handful of CMJ shows and now they announced a December tour together. The tour includes a hometown show on December 18 at Music Hall of Williamsburg. Tickets for MHOW go on sale Friday (10/23) at noon. Perfect Pussy also have another run of shows with Fielded. All dates are listed below.

In addition to playing CMJ, Perfect Pussy singer Meredith Graves kept a CMJ diary of the shows she saw for the Village Voice. You can read all three parts, Your Band Is Bad Unless It's Good, Imagining A World Without Men, and I Choose You.

In the midst of the Perfect Pussy tour, Meredith also plays the BV-presented Kevin Devine release shows with Tigers Jaw, Matthew Caws (of Nada Surf), Owen, Cymbals Eat Guitars and one more TBA. The NYC show is 12/11 at The Bell House and tickets are still available.