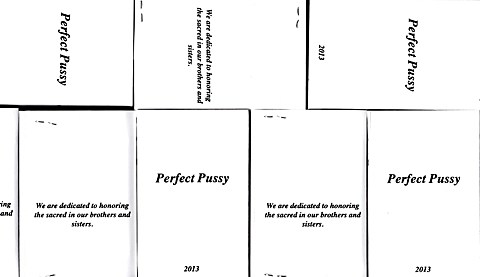 Last month, we posted a stream of I Have Lost All Desire For Feeling, the debut demo/EP of Syracuse noise punks Perfect Pussy, whose lineup includes ex-members of the similarly great Shoppers, before they played a Labor Day (9/2) show in Brooklyn at 285 Kent with Psychic Blood and Weed Hounds. The band have since announced that they'll be coming back around these parts in early October. First they'll play Shea Stadium on October 3 with two solid local bands, My Teenage Stride and Advaeta, and Cincinnati's Tweens.

Then, they'll open the previously discussed Potty Mouth show happening at 285 Kent on October 5, which makes for a great double bill. Tickets for that show are still available. Potty Mouth's debut album, Hell Bent, is out now and it can be streamed at NPR. Perfect Pussy's EP can be streamed below.

Meanwhile, Tweens will be back in NYC to open the Bowery Ballroom (11/5) stop on Black Lips' tour (tickets).

Perfect Pussy - I Have Lost All Desire For Feeling