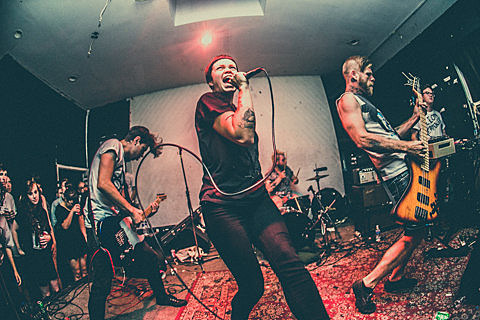 In the past year, you've seen Meredith Graves sing in her band Perfect Pussy, you've seen her talk Andrew WK, Lana Del Rey and double standards, and maybe you've read her opinions on Sun Kil Moon or her writing at Rookie (like this piece on Embrace). Well now she's got even more on her plate -- she's going solo.

She told DIY Mag that she's writing a solo record now to come out in 2015 and is also setting up her own record label and publisher, with the first two releases due out this spring. One of those, she told Fucked Up singer Damien Abraham on his podcast, will be from the band So Stressed.

She also says she'll be prefacing the solo record with a few split 7"s, including one with singer/songwriter Kevin Devine (who's touring soon). Regarding that decision, she told DIY Mag, "Each of us went through a motherfucker of a personal loss this year, and we just realized that without discussing it first, we're both writing songs about our situations. He's a new friend and I feel like I've known him forever." None of her solo music is out just yet but stay tuned. Hopefully it won't just be christmas cookies.

Perfect Pussy are done playing shows for 2014, but you can catch Meredith in NYC TONIGHT (12/11) at HiFi Bar (formerly Brownies) for their "Words and Guitars" series. She'll be reading, along with Okkervil River singer Will Sheff and rapper Billy Woods, as well as Zachary Lipez, Michael Tedder, Mishka Shubaly, Daniel Ralston, Hannah Silk Champagne and Rob Sheffield. That begins at 8 PM.

Perfect Pussy released their debut album, Say Yes to Love, earlier this year on Captured Tracks and it's been ending up on a few year-end lists. Watch a fan-made video of "Driver" from that with concert footage below...