Perfume Genius outside Glasslands in April (more by Amanda Hatfield) 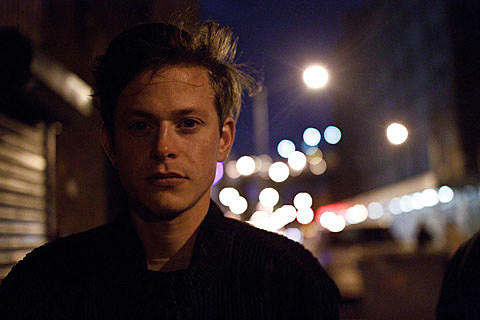 Perfume Genius (aka Mike Hadreas) will be touring Europe at the end of this month into July, and it's just been announced that upon his return to the states, he'll open a few dates for Sigur Ros, including their sold out Prospect Park show on July 31. Perfume Genius also recently dropped a new track called "Rusty Chains," which you can download above or stream below.

While Perfume Genius will be handling support duties in NYC, Philly, and Toronto, Julia Holter will open the band's west coast shows. Julia recently announced a headlining tour of her own, which comes to NYC on August 31 at Bowery Ballroom. When we first mentioned that show, ticket info had not been made available yet, but we now know that tickets go on sale Friday, June 8 at noon with an AmEx presale starting Wednesday (6/6) at noon.

A list of all dates and the Perfume Genius song stream below...