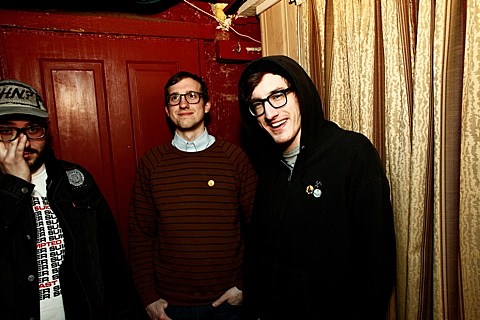 Pet Symmetry is one of the many bands of Evan Weiss (also of Into It. Over It., Their/They're/There, Stay Ahead of the Weather, ex-The Progress and more), and also features Erik Czaja (Dowsing, Kittyhawk) and Marcus Nuccio. As discussed, they're releasing a split with Slingshot Dakota as part of the Soft Speak Records split 7" series on November 25, and their contribution, "Potted Plant Meets Vintage Amp: A Katherine Grube Love Story," premieres in this post. You can clearly tell Evan's fingerprints are on this, but Erik writes the songs and then the band collaborates. Evan calls it the most equal contribution of any band he's ever played in. The new track is more of a straightforward power pop tune and less mathy than Evan's projects end to be, and Erik's Kittyhawk bandmate Kate Grube contributes guest vocals too. Check it out below.

Slingshot Dakota's contribution to the split is a cover of "Rise" by the reunited Rainer Maria. You can pre-order it here. 100% of proceeds go to Hopeline, who focus on suicide prevention, awareness and education.