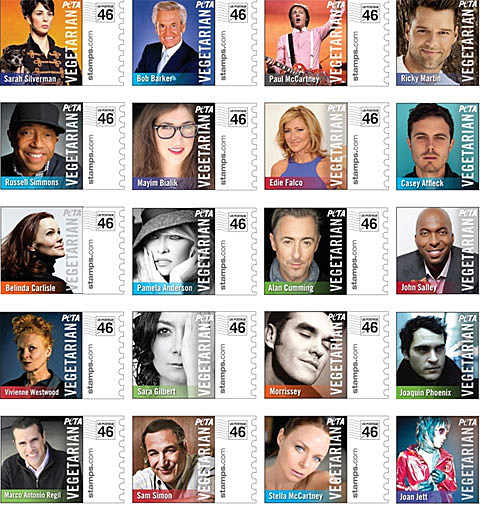 PETA just released a new set of limited edition stamps featuring famous vegetarians, and a bevy of musicians and music industry folks are included on the sheet amongst the likes of Bob Barker and Joaquin Phoenix (though the list two years ago was a bit more interesting with Leonardo da Vinci, Johnny Appleseed who I wasn't aware he was actually a person and Gandhi). Paul McCartney, Ricky Martin, Russell Simmons, Joan Jett, Sarah Silverman, Vivienne Westwood, Mayim Bialik, Edie Falco, Belinda Carlisle and, of course, Morrissey made the cut. Would Grimes use these stamps? (she probably won't be featured on one)

I think animals look to humans for protection, and of course humans lead them into slaughterhouses, which to me is just like an image of leading children into a slaughterhouse. There's no difference.

And some words of wisdom from Sir Paul McCartney:

If anyone wants to save the planet, all they have to do is just stop eating meat. That's the single most important thing you could do. It's staggering when you think about it. Vegetarianism takes care of so many things in one shot: ecology, famine, cruelty.

You can order the stamps over at PETA, and be sure to use the Joan Jett ones for all your letters to South Dakota.

Speaking of Morrissey, a new book aiming to catalogue Smiths tattoos is in the work, and they're looking for anyone with a Smiths or Morrissey tattoo to be a part of it. Here are deets on that:

"To Me You Are A Work of Art" is a photo project in search of anyone with tattoo(s) related to, or inspired by, Morrissey and/or The Smiths. The photographs will profile fans and all their tattoos from various cities across the country over the course of the next few months. All photos will be taken by Toronto based photographer Patrick Moore.
The New York City date is this upcoming Sunday, November 24th and will be held at the Rocks Off offices in the Lower East Side (195 Chrystie St #401B) between 2pm and 4pm.
For any additional information - email YouWorkOfArt@gmail.com"

In Ricky Martin news, RM just listed his East Village condo in that really cool turquoise building on Bond Street for $6.8 million, and he just had his first book published, a children's book called "Santiago the Dreamer in 'Land Among the Stars.'" It's good to be Ricky Martin.