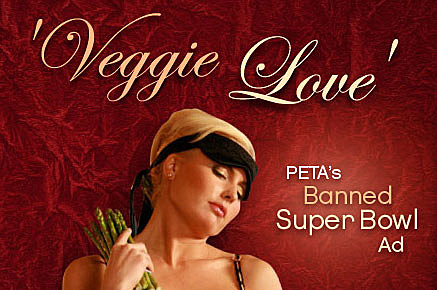 PETA writes, "Apparently, NBC has something against girls who love their veggies. After we submitted our proposed Super Bowl ad, which features a comely crop of models demonstrating their fondness for fresh produce, NBC nixed the ad, saying it "depicts a level of sexuality exceeding our standards." No joke, this is straight from NBC--so stop fondling your fruit salad right now and read the list of shots NBC requested we cut before they'd reconsider: licking pumpkin, touching her breast with her hand while eating broccoli, pumpkin from behind between legs, rubbing pelvic region with pumpkin, screwing herself with broccoli (fuzzy), asparagus on her lap appearing as if it is ready to be inserted into vagina, licking eggplant, and rubbing asparagus on breast... Wow, that list even made us blush! You can read the full NSFW letter from NBC here."

A gimmick they pull every year? Probably. Regardless, 'banned' video below...

Not banned from the Superbowl: Bruce Springsteen