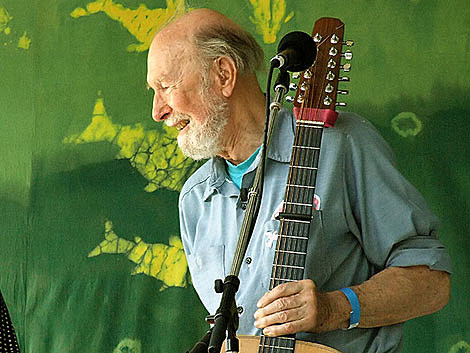 The Clearwater Concert: Creating the Next Generation of Environmental Leaders, a star-studded, one night only concert event celebrating Pete Seeger's 90th Birthday, will be held on Sunday, May 3, at 7PM, at Madison Square Garden. This once-in-a-lifetime concert event will benefit and raise awareness for Hudson River Sloop Clearwater, founded by Pete Seeger, which strives to preserve and protect the Hudson River. Seeger, a legendary folk singer, political activist and avid environmentalist, has long inspired social change through his extraordinary life and music. The Clearwater Concert: Creating the Next Generation of Environmental Leaders will feature over 40 artists representing a wide variety of musical genres and generations, including Joan Baez, Ben Harper, Ani DiFranco, Dave Matthews, Michael Franti, Emmylou Harris, Juanes, John Mellencamp, Tao Rodriguez-Seeger, Bruce Springsteen, Taj Mahal, Eddie Vedder, and Keller Williams. The evening, hosted by Clearwater, will focus on ensemble renditions of musical treasures inspired by Pete Seeger.

American Express pre-sale tickets will be available starting Monday, March 23 at 9AM. Public on-sale will begin Monday, March 30 at 9AM. Tickets are available via ticketmaster.com and range from $19.19-$250, with a majority priced at $90 to honor Pete's birthday. Special Clearwater Legacy Tickets will also be available. For more information, please visit www.Seeger90.com.

Hudson River Sloop Clearwater, Inc. is an environmental organization with the mission to preserve and protect the Hudson River through inspiration, education and action. Legendary folk musician and activist Pete Seeger founded the organization in 1966 when he decided to "build a boat to save the river" with the belief that a majestic replica of the sloops that sailed the Hudson in the 18th and 19th centuries would bring people to the river, where they could experience its beauty and be moved to preserve it. Thus inspired, the 106-feet-long tall ship Clearwater was launched three years later.

Since 1969 almost half a million people have experienced the Hudson River first-hand-its living organisms, water chemistry and ecological principals-aboard the sloop Clearwater. Named to the National Register of Historic Places in 2004 for its role in the environmental movement, the Clearwater was among the first vessels in the U.S. to conduct science-based environmental education aboard a sailing ship, effectively creating a template by which such programs are conducted around the world today. Clearwater's environmental education programs now serve more than 15,000 students and their teachers annually, and the organization's members have helped push for passage of the landmark Clean Water Act and fight for removal of toxic PCB's from the Hudson.

To help raise awareness for its mission, Clearwater presents the Great Hudson River Revival each June at Croton Point Park, located in Westchester County, an hour north of New York City. This two-day music festival will take place June 20-21, 2009. Tickets go on sale on March 17, 2009. Year after year, Clearwater's unique approach to public outreach has made the Clearwater a symbol of grassroots action through hands-on learning, music and celebration. www.clearwater.org/festival.