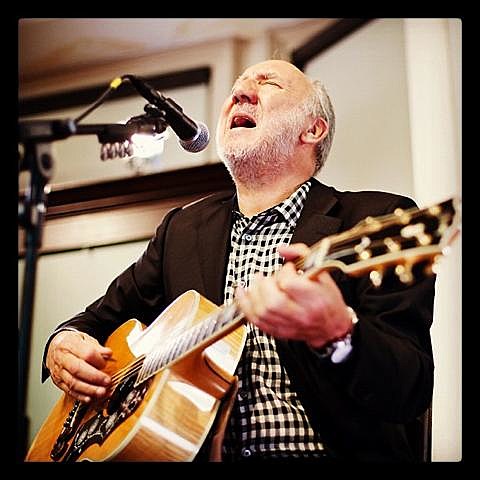 The Who's Pete Townshend came to NYC this week in support of his new memoir, Who I Am, making appearances on The Daily Show with Jon Stewart and NYPL on Monday (10/8), at Barnes & Noble in Union Square yesterday (10/9), and then on Late Night with Jimmy Fallon later that night (the same episode that Jens Lekman was the musical guest on). That's a picture of him performing at Barnes & Noble above, where he played "Won't Get Fooled Again" and "Drowned" after a 45-minute interview. He also performed at his NYPL appearance, playing "Drowned" and "I'm One." Rolling Stone attended the B&N show and they report:

Townshend also opened up about the difficulty he's faced continuing the band after John Entwistle's death in 2002. "We feel the ghosts of Keith and John," Townshend said. "The second phase of the Who in a sense was really when we started to tour again around the year 2000, 2001. We were still able to evoke the sound, particularly with Zak Starkey. Now it's much more difficult even though Zak's there. John's sound was very big and rich and organic. When John died, there was a hole in the sound onstage and I was able to grow into that and find space. And I have to say as a guitar player, I prefer working without John. But as a member of the Who creating the incredible, powerful, driving, visceral sound, he's gone. I can't really do that again."

At one point, Wenner asked Townshend why he hasn't made a solo album in 20 years. "I write lots of music, I record lots of music. I probably write a song every couple of days," he said. "I have a very big archive of unfinished material."

Currently, Townshend is working on the musical project Floss, which he said he is about two-thirds finished, which he described as "a story with music, characters, a Aristotelian plot line very different from what I've done in the past. . . . The thesis is we're all terrified. We're living in terror, we're living in anxiety, discomfort and the fear that we have is for the future, the fear for our children's future, we're worried about the planet, we're worried about terrorism, being able to sustain life as we love it, we're afraid we can't guarantee peace."

Townshend said he loves Lady Gaga and constantly listens to music. "I just kind of surf Spotify and last.fm and iTunes and stick it on my iPhone. I listen to a lot of new music." He added that he predicted digital downloads "back in 1985 and before that in 1971. I knew there the digital revolution would change the way art happens and is made and is sold and we're not finished yet."

You can check out videos from his interviews on The Daily Show and Fallon, and his performance "Drowned" from the NYPL show below. You'll notice in the Daily Show video that when Pete walks out, Jon Stewart's house band plays a clip strikingly similar to the second half of Led Zeppelin's "Stairway to Heaven." Neither Pete or Jon acknowledge it, but it's a pretty ironic move considering Pete never liked Zeppelin's music (though he does think they're great guys).

The Who are taking their Quadrophenia tour to the NYC area for four shows in November and December.

Pete Townshend on The Daily Show

Pete Townshend on Fallon (via The Audio Perv)