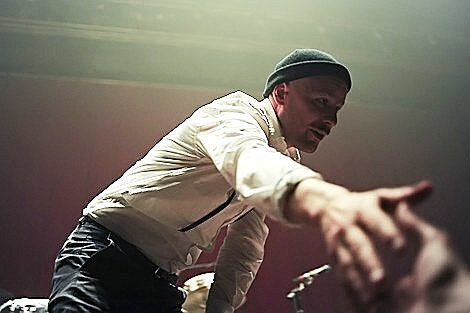 Peter Bjorn & John have been no stranger to NYC this new-album year. In March there was the show in a hotel, and in April it was Webster Hall and Music Hall of Williamsburg. It's now the third day of August and they are back for two more shows, each at the enormous Madison Square Garden; they're opening for Depeche Mode (weird match, I know). In November they (PB&J) might be back again. AND, last but not least, they are playing a list-only show at Cake Shop tonight (8/3) ("after midnight") ("Peter, Bjorn and John will be playing a stripped down set in this intimate setting for friends and fans").

The Stereogum-presented, intimate show was available to Stereogum contest winners (who have already been contacted), and I have some pairs to give out as well. Details on entering the contest below...

TO WIN TIX TO SEE PB&J @ CAKE SHOP: Email BVCONTESTS@HOTMAIL.COM (subject: Peanut Butter and Cake). Include your first and last name. Winners will be contacted ASAP and placed on guestlist.

P.S. . PB&J also have a new EP release, It Don't Move Me, which features remixes by Miike Snow, Weird Tapes and Jacko from Teddybears