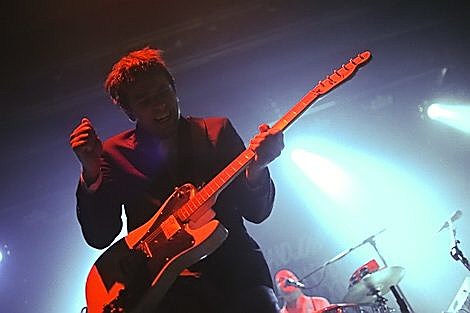 Oops! Peter Bjorn and John's November 10th Terminal 5 show has been moved down to the smaller Webster Hall one day earlier (November 9th). El Perro Del Mar and Brooklyn (via Japan)'s The Suzan open the show. All T5 tix will be honored, and some are still on sale too.

El Perro Del Mar was supposed to play Joe's Pub on November 9th, so that was also canceled with this change.

"was formed by two Japanese girls, RIE(Guitar) and SAORI(Vocal) in the summer of 2003. They had been sicking and tired of recent Japanese POP idol music. So they decided to produce their own songs and bring the movement and revolution to the music scene of not only Japan but also the world by their sound."

Based on watching one of their videos (below), I'm not sure how soon they'll be making a name for themselves in the world, but somehow they got on this T5 bill, and on one of the two Fool's Gold CMJ parties this year. The flyer and more info below...

Indie powerhouse Fool's Gold continue their dedication to smashing events in their hometown with two nights of CMJ madness on October 21st and 22nd. The showcases double as a birthday celebration for the label, which was founded in 2007 by A-Trak and Nick Catchdubs, and helped turn an underground DJ scene into a genre-transcending musical force with some of the most exciting new releases of the past two years.

First up on Wednesday 10/21 is a showcase at 88 Palace in NYC - a converted dim sum restaurant! The homemade rave vibe is perfect for the label, who will be showcasing new signings like Donnis and Kingdom, along with live bands (a first for FG) Vega and The Suzan, as well as Treasure Fingers, Trackademicks, and Sammy Bananas. The next night (10/22) at N8 in Brooklyn, Fool's Gold's dance music trailblazers Jokers Of The Scene, LA Riots and Nacho Lovers take over the decks, joined by friends Jamie xx, Udachi + Jubilee, and special guests. Both nights are not to be missed! Sleep is wildly overrated!