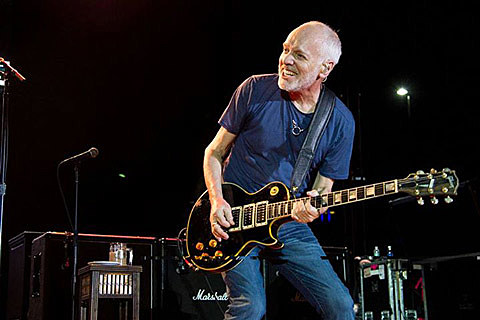 Like it, tolerate it, or loathe it, cellphones have become a part of the concert experience. Most people will take a few shots to instagram or whatever, but some folks don't seem to have any boundaries on etiquette or common courtesy. At a Peter Frampton show at he Palladium in Carmel, IN -- where cameraphones were allowed, just no video or flash -- on Sunday (8/3), one couple took the cake. A firsthand report from Onstage Magazine:

There was one couple who came in and sat in the front row, center....They began taking flash pictures and recording. He with his phone; she with her camera. At first, Peter kept gesturing to them saying "No, don't do that. Stop!" But they just did not get the hint.

Even after being asked by Frampton from stage, the couple did not stop. Then Frampton took matters into his own hands:

As he neared the end of the song, you could see the absolute look of desperation and frustration on Peter's face. I have never seen an artist so upset before. Once, and he stormed off the stage. At his breaking point, and the guy in the front row unrelenting - apparently with no self control considering he's already flipped Peter off and turned around and called the rest of the audience a bunch of deadbeats - Peter ends the song, walks over and with a huge smile on his face bends down and says, "Hey can I see that? Can I see the photos you've been taking?" The guy hands him his phone and Peter stands up, spins, and flings for the rafters! Yes! The phone went flying to the back of the stage and we all erupted in cheers! With years of experience playing guitar, we just knew he had a great arm!

Read the whole thing over at Onstage Magazine.