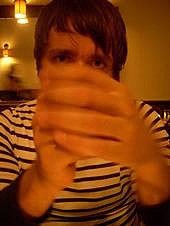 Nearly two months ago, Peter Morén, one third of the indie rock hit-makers Peter Bjorn And John, was showcasing unadulterated material at one of New York's most intimate venues. Now, the frontman has announced an April 8 release date for his first solo album, The Last Tycoon (Quarterstick)..............The poppy 10-track endeavor is said to touch heavily upon adolescence and features artwork drawn by the frontman's girlfriend. And lastly, but certainly not least, Morén imparted the details of a short 12-date tour that kicks off at the Mercury Lounge in New York, officially inaugurating his April debut. [CMJ]

I think Peter will also be at SXSW in March. Tour dates below...