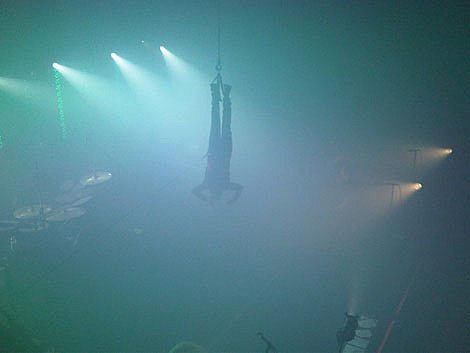 "Whether rising from coffins on-stage, driving a hearse called the "Bauhearse," or appearing in concert as vampires, Bauhaus was one of the establishing acts of the goth movement. Their use of spacey recording effects and theatrical aesthetics was evocative of both early horror films and glam rock; they became an influential group in the early days of gothic rock.

In 1982, Bauhaus appeared during the opening sequences of the horror movie The Hunger, performing one of their most popular songs, "Bela Lugosi's Dead". The camera focused almost exclusively on Murphy during most of the scene, panning only briefly to the stars David Bowie and Catherine Deneuve." [Wikipedia]

Nine Inch Nails have completed their four-night run in NYC. Tonight (8/26) was the 2nd show at Terminal 5 and it ended with another guest appearance by Peter Murphy who descended from the ceiling on a chain... upside down like a bat (see above and below).