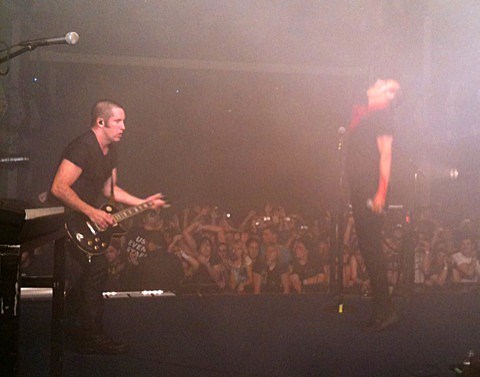 As Kanye West and Amber Rose watched from the balcony (sorry for the gossip) at Terminal 5 last night (8/25), Nine Inch Nails played 29 songs at their 3rd of 4 NYC shows this week. The major highlight of the evening (for me at least) was that Peter Murphy of Bauhaus joined them for 3 of those songs, one of which was a Bauhaus cover ("Kick in the Eye). It wasn't the first time it's happened, but it was very sweet.

Earlier in the set, NIN played "I'm Afraid of Americans", before which Trent said something about getting to work with an idol on a song a few years ago, but unfortunately, despite that tease, David Bowie was nowhere to be found in the building. Now that I think of it, they totally should have had Peter sing Bowie's part on that one.

Trent introduced Peter Murphy by saying that back in 1990, when they were young and just coming up, someone helped them out and took them on the road. Then came Peter to the stage to help them perform "Reptile" which was followed by "Kick in the Eye". Peter returned in the encore to help NIN do their cover of Joy Division's "Dead Souls". His stage presence is awesome.

I thought the whole show was great, but it was the final ten songs that really made it feel like there was energy in the large, cavernous room. Basically: Peter--> Peter--> Hands That Feeds--->Head Like a Hole---> all encore songs w/ 1 Peter again---> final-emotional-Hurt. What did you think?

Night one (Bowery Ballroom) got "smallest venue ever". Night two (Webster Hall) got The Downard Spiral from start to finish. Night three got Peter Murphy. Night four happens tonight (Wednesday, August 26th), again at Terminal 5. All 10 "Wave Goodbye" dates (Trent at one point said something like "I'll miss you guys") (which bothers me a little because I don't actually believe this is the end) HERE. Stay tuned for more. Full setlist below.