DOWNLOAD: Peter Bjorn and John - Me and Julio Down by the Schoolyard (MP3) 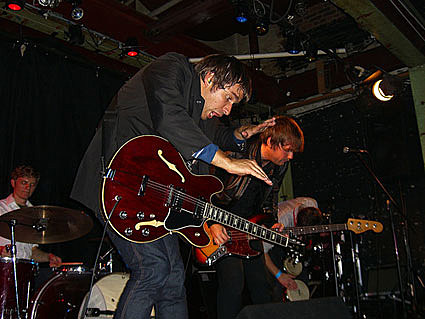 Did anyone check out Peter and Bjorn @ Galapagos Saturday night? At first I was confused by the missing member, but I see from the pictures that it just meant they had a different drummer - which is not the first time that happened, but last time they played without John they just left their name the same.

I didn't go to Galapagos (obviously), but I did see Peter & Bjorn at Bowery Ballroom a few nights earlier - they were both in the audience watching Dan Deacon and Deerhunter, and they both also stayed all the way to the end.

Peter is playing without John & without Bjorn @ Joe's Pub in NYC on November 19.

Peter writes a lot of songs - too many to fit in the prospect of just one band with three songwriters so in his spare time he has recorded a solo album that bears some kinship with Paul Simon, Tim Hardin, Brian Eno, John Cale, Caetano Veloso, Robyn Hitchcock, The Go-Betweens and maybe The Shins’ acoustic ballads. Peter will mostly play by his lonesome, but may invite guests or have some special treats up his sleeve. Join him at Joe’s Pub for his raw, singular set. [Joe's Pub]

Tickets are at Joe's site.