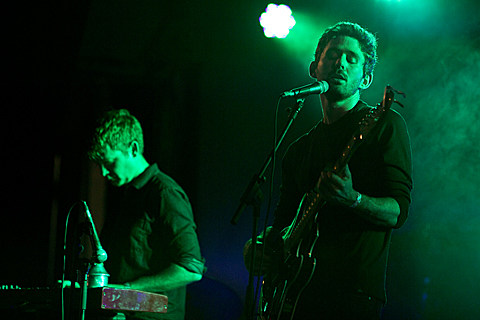 Death by Audio is now closed for good, and as you've probably heard by now it's only about another month before its S. 2nd & Kent neighbor Glasslands will be the same. Like DbA, Glasslands is going out with some cool final shows like The Pains of Being Pure at Heart tonight (11/24) and others that we posted HERE. Since we last spoke, more of these cool shows have been announced, including:

TEEN and Beverly team up on December 4 with Charly Bliss and Scully (tickets).

Delicate Steve and Celestial Shore team up on December 18 (tickets).

Widowspeak and What Moon Things play together on December 20 (tickets).

There's a big holiday party on December 21 that will have a house band led by Darkside's Dave Harrington, featuring a number of guest singers from other Brooklyn bands including The Antlers' Peter Silberman, Bear In Heaven's Jon Philpot, Real Estate's Alex Bleeker, Here We Go Magic's Luke Temple, People Get Ready's Jen Goma and a handful of others. The house band also includes Dave Harrington/Nico Jaar collaborator Will Epstein, ARMS' Todd Goldstein and more. Full list of singers and house band lineup below. Tickets are on sale.

Bass Drum of Death play December 28 with Mitski (who plays Knitting Factory before that), Sundelles and LUSHES (tickets).

What are the Holidays without a pan-demoninational holiday party concert? Dave will be leading a special house band for the night and will take you on a journey through holiday cheer of any and every stripe. The band will back an eclectic collection of singers as they sing songs near and dear to them to celebrate the season. Featuring guest vocalists: