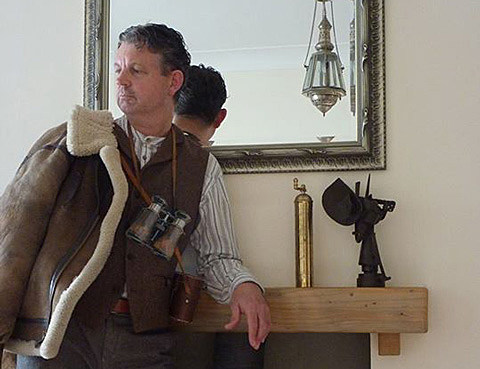 Peter Ulrich played drums and percussion in the early years of Dead Can Dance, and is on many of their 4AD albums, including 1984's self-titled debut and 1987's Within the Realm of a Dying Sun. He also contributed "At First, and Then" to This Mortal Coil's Filagree & Shadow and played on Wolfgang Press albums as well. He's released a number of solo albums, too, which don't stray too far from the gothy, orchestral folk of Dead Can Dance. Those include 1999's Pathways and Dawns which was produced by DCD's Brendan Perry, and 2013's The Painted Caravan, the first in a planned trilogy. In May, Ulrich will release Tempus Fugitives, which is the second in the "Painted Caravan" trilogy. Check out the single "Dark Daddy," which features harpist Erin Hill (who has played on records by Enya, Kanye, Moby and more), below.

His band, The Peter Ulrich Collaboration, will play their first-ever live show at Webster Hall's Marlin Room on June 20 with Erin Hill and French & the Punk. Ulrich also promises "VERY special guests" at the show. Tickets go on sale Friday (1/30) at 10 AM.