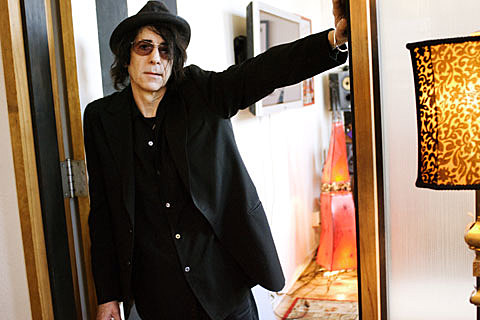 "Wolf was born in the Bronx, New York. He planned a career as an artist, but he got a job in the late 1960s as a disc jockey on then-cutting edge Boston FM radio station WBCN and began exploring his interest in blues and rhythm and blues music, giving himself the nickname "the Wolfa Goofa", sometimes expanded to "the Wolfa Goofa with the Green Teeth" (as mentioned in the intro to "Must of Got Lost" on the Blow Your Face Out album). Later as solo artist he called himself Woofa Goofa Mama Toofa. He formed a group called the Hallucinations who performed with The Velvet Underground, Howlin' Wolf, Muddy Waters, Van Morrison, John Lee Hooker, and Sun Ra. He then saw the J. Geils Blues Band in concert and quickly joined. He was the vocalist and frontman, and often acted as a sort of manager. Wolf was known for his charismatic stage antics of fast-talking quips and "pole-vaulting" with the miorophone stand. He and keyboard player Seth Justman were responsible for most of the songwriting. Creative differences followed their Freeze-Frame album, causing the J. Geils Band and Peter Wolf to part ways in 1983." [Wikipedia]

As mentioned in today's What's Going On post, J Geils Band singer Peter Wolf was added at some point to the Bettye LaVette show tonight at Highline Ballroom (no more advance tickets obviously, but they venue writes that standing room tickets will be available at the door). At the gig, Bettye will perform songs from her new CD, Interpretations: The British Rock Songbook, out now (get the Stones cover above). Peter Wolf co-headlines and will play second.

If you miss it, Peter has another NYC gig happening this Friday, May 28th at the Bell House with Kenny White. Tickets are still on sale. Both shows are part of a tour he's been on for most of May and which ends May 30th in Virginia.

Peter Wolf (not to be confused with Peter Wolf Crier) is touring because he has a new album, Midnight Souvenirs, which came out in April on Verve/UMe and has guest spots by Merle Haggard, Shelby Lynne and Neko Case.

"Kicking off with the hook-heavy "Tragedy", Wolf and Lynne trade vocals that plant one foot in the soul firmament and the other in country, crafting a catchy tune that cleverly melds the two styles. Case elicits chills when her beautiful, expressive voice transforms "The Green Fields of Summer" from a slow, fiddle-driven ballad featuring Wolf to what sounds like a long-lost folk classic featuring a lush string arrangement." [PopMatters]

Wolf will perform with the J. Geils Band again, at a show with Aerosmith at Fenway this August. Videos of Wolf with the band and solo, and all tour dates, are below...