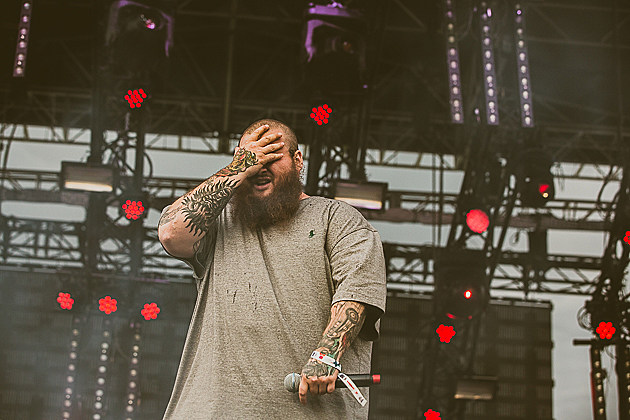 Among this year's NXNE shows is Action Bronson's free outdoor show on 6/21 in Yonge-Dundas Square, one of the busiest common areas in Toronto. Not everyone is excited though. A Change.org petition has been launched by local activist Erica Shiner to get Bronson removed from the show for "[glorifying] gang-raping and murdering women." The petition reads:

Action bronson glorifies gang-raping and murdering women. It is an insult to the people of Toronto for NXNE, Now Magazine, Vans Footwear, and the City of Toronto to be featuring an artist on public property whose lyrics are as follows:

"Then dig your shorty out cuz I geeked her up on molly
Have her eating dick, no need for seasoning
If seven dudes are in the room then she's pleasing them
Like a trooper. Hit her in the pooper. Throw her in the shower
Then I take her out to Lupa I'm kinky, I'll hit it even if it's stinky
Put em in the shower, make the pussy brand new Ran through.
Give 'em money what I can't do Stuff her lunchbox & burn her with the candle"

Shiner goes on to say that the lyrics quoted above (from the song "Consensual Rape") are hate speech, and that "a musician who glorifies rape and violence against women should not be invited to perform at a public space in our city." The petition has 1,974 supporters as of this post, and Toronto artist Austra shared the link on their Twitter as well.

The NXNE organizers have defended their decision to book him in a new statement, which reads:

On Tuesday, May 26 a group of concerned Torontonians created a petition to remove Action Bronson from NXNE's lineup on Sunday, June 21 at Yonge-Dundas Square. The petition has spawned a passionate online discussion. The Festival would like to address this topic.

Action Bronson performed at Yonge-Dundas Square as part of NXNE in 2012 with Killer Mike, Raekwon and Ghostface Killah. It was a positive concert that was described by reviewers as "laid back", "a lot of fun" and a "world class hip-hop showcase". NXNE is confident the lineup on June 21 at Yonge-Dundas Square will make for another enjoyable day of music in a public space.

"NXNE will also present a number of rap artists at various venues, such as Tink and Kate Tempest, who have be lauded for the undisguised feminist viewpoints in their music." says Sara Peel, Managing Director of NXNE. " "That being said, in the interest of moving forward in a positive manner, we are engaging in discussion with our community about this important issue, and looking to provide opportunities for concerned voices to be heard."

NXNE believes each and every one of these artists have the right to express their views through music, but those views belong to them and them alone. Those who are offended by an artist are invited to check out other Festival showcases, as NXNE will present hundreds of artists this June - some may be considered controversial, but most are just plain fun.

There's also another Change.org petition launched by another local, James Friske, in response to Erica Shiner's, titled "Stop Feminist Extremeists from Censoring Action Bronson's Free Speech and his Performance at NXNE." It reads:

Erica Shiner and her parteners either knowingly or unknowingly manipulated the meaning of the lyrics do describe the non-consensual drugging and gang raping of the woman in the lyrics, based on the single line "cuz I geeked her up on molly" This is a loose play of language to describe his giving her molly, and her willingly taking it. All other aspects of the lyrics do not contain material that describe the woman as being used against her will, in fact the same verse contradicts the idea of it. None of the sexual acts described are illegal, and in a court of law this would not stand as proof that a rape has occurred.

There are currently 3000+ people who will be attending the free concert, and I call on The city of Toronto, Yonge and Dundas Square Management, and Sponsors to stand up for free speech in the face of censorship by an extremist minority.

UPDATE: Bronson has now added, "It's so funny the song that is causing these Torontonians to have their panties in a bunch literally has never been performed, ever." And, "5 years ago a lost track. That's what u base UR argument on? HOW ABOUT THE 9 PROJECTS THAT HAVE COME OUT SINCE? Don't single me out."