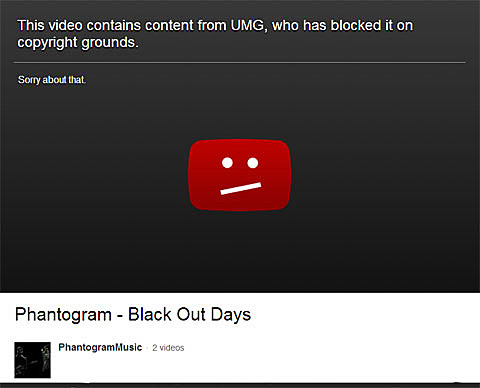 As you can see in the above screen shot, UMG aka Universal Music Group isn't too happy that someone posted Phantogram's first new song in two years to YouTube. It's just too bad that someone is Phantogram themselves!

The track, "Black Out Days", is from a forthcoming LP that will be released via Phantogram's two labels, Barsuk and [Universal] Republic. You can still listen to it though, via the band's Soundcloud (shhhh, don't tell Universal). Click play below...

Phantogram heads out on tour later this year and hits Terminal 5 in NYC, Chicago, Texas and many more places along the way.
--