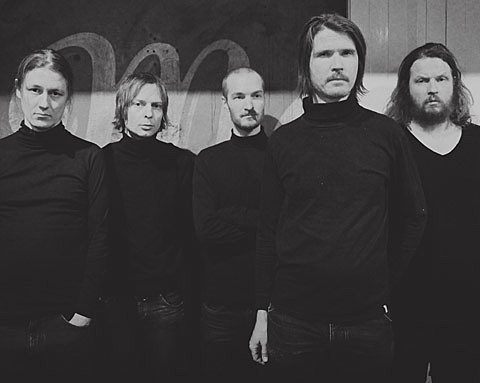 Much like in their related band Circle, Jussi Lehtisalo, Janne Westerlund and Tomi Leppänen inject their fair share of oddity into their Pharaoh Overlord project. Primarily based in the stoner-krautrock genres, Pharaoh Overlord, which now contains Faust great Hans Joachim Irmler, ventures into hynotic space-blues, jazzy passages, and even some ambient in their unique melting-pot longplayer Lunar Jetman, due on 2xLP via SIGE Records (up for pre-order) and CD via Ektro. Check out the opening cut from the LP, "Rodent" and "Cardinal" both streaming below.

Meanwhile, kraut-prog-metal-all-of-the-above band Circle is ALSO preparing a new studio record of their own (aren't they always?), due via Hydra Head in time for Record Store Day. Look for details regarding Manner in the coming weeks but in the meantime, look for a new live LP from the band via Ektro. Serpent, a live album pulled from an October 2011 show in the UK, is currently up for preorder and you can stream two songs from that release below.

In related news, Ektro has also released a retrospective of Finland's Death Trip as well. Death Trip combined slithering punk with the gothic post-punk touches of The Birthday Party and the brutality of the mighty Brainbombs, and you can eulogize their passing with Pain is Pain - The Complete Death Trip 1988-1994. Stream a pair of tracks, "Chainsaw Goddess" and "Death Trip", both of which are below.

All streams are below, along with some video.