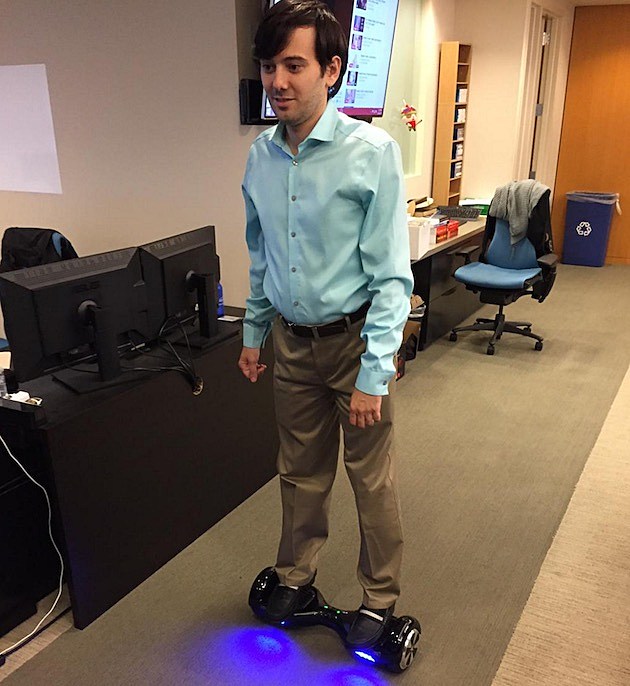 Phamacutical CEO, AIDS drug price-hiker, former Collect Records backer and $2 million buyer of that Wu-Tang album, Martin Shkreli was just talking about bailing out jailed rapper Bobby Shmurda... and now Shkreli himself has been arrested. Thursday morning (12/17) federal agents apprehended him in his Manhattan home on charges of "securities fraud related to a firm he founded." From Bloomberg News:

Prosecutors in Brooklyn charged him with illegally taking stock from Retrophin Inc., a biotechnology firm he started in 2011, and using it to pay off debts from unrelated business dealings. He was later ousted from the company, where he'd been chief executive officer, and sued by its board.

In the case that closely tracks that suit, federal prosecutors accused Shkreli of engaging in a complicated shell game after his defunct hedge fund, MSMB Capital Management, lost millions. He is alleged to have made secret payoffs and set up sham consulting arrangements. A New York lawyer, Evan Greebel, was also arrested early Thursday. He's accused of conspiring with Shkreli in part of the scheme.

Retrophin replaced him as CEO "because of serious concerns about his conduct," the company said in a statement. The company, which hasn't been accused of any wrongdoing, has "fully cooperated with the government investigations into Mr. Shkreli."

When Shkreli was sued by his former employer Retrophin, he said "The $65 million Retrophin wants from me would not dent me. I feel great. I'm licking my chops over the suits I'm going to file against them." Brooklyn U.S. Attorney Robert Capers will discuss the case at a press conference later today in Brooklyn. Stay tuned.

UPDATE: The FBI released a detailed statement on the arrest. Shkreli and attorney Evan Greebel, a former partner at the New York office of Katten Muchin, were charged with "Defrauding Former Hedge Funds Investors and Then Misappropriating More Than $11 Million in Assets from Publicly Traded Retrophin Inc. to Pay Back Defrauded Investors." You can read the whole thing.

But as to the big question on everyone's mind: