photo: Pharmakon at Saint Vitus in 2013 (more by Fred Pessaro) 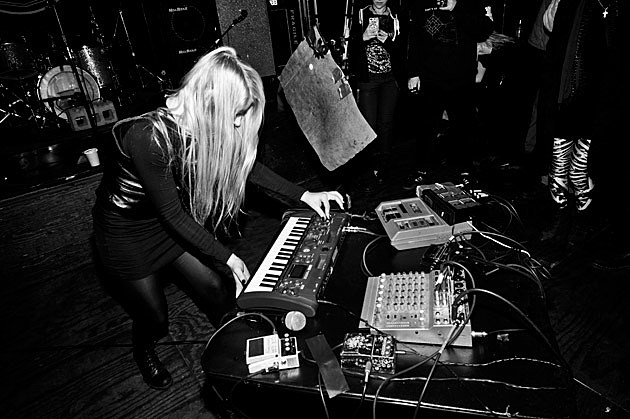 NYC's Pharmakon, whose 2014 album Bestial Burden placed at #64 on the Pazz + Jop Poll, will be on a North American tour for the rest of this month and most of February. Upon returning to NYC, she'll open for hometown legends Suicide at their Webster Hall show on March 7, also with The Vacant Lots. Tickets for that are still available. All of Pharmakon's dates are listed below.

In somewhat related news, tonight (1/15) is the issue 15 launch party for Nuts! Fanzine (which has previously interviewed Pharmakon) at Printed Matter (6-8pm). NYC punk band Flykills will play a set at the event which runs from 6-8 pm.

Flykills feature former members of the Florida punk band St. Dad, who White Lung named a song after, and who White Lung singer MIsh Way is openly a huge fan of. You may have seen Flykills when they opened for White Lung at Glasslands last year. Their latest release, the snotty raw Lump of Flesh EP, was also Tweens' third favorite album of 2014. You also may have seen Flykills last year at Cake Shop with the Tweens-related band Vacation.

Stream the Flykills EP and watch a video of them at that Glasslands show, below...