Pharmakon at Drone Activity in Progress, May 2013 (more by PSquared) 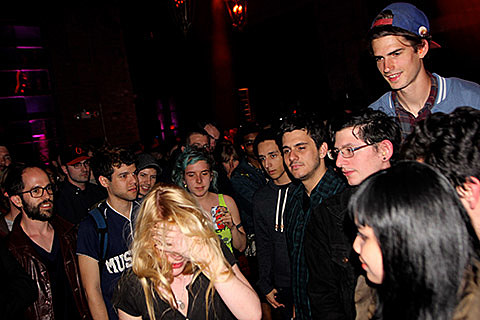 NYC's noise beast Pharmakon just played a hometown show at Trans Pecos on Wednesday (1/29) (how was it?), and now she's got more dates coming up too. If you haven't been able to catch her obliterating a showspace recently (or just need to see her again), you'll have at least two more chances to see her in her hometown in the upcoming months.

She'll be adding support to a few dates on the previously mentioned and long-postponed Godflesh tour, including the NYC show happening at Irving Plaza on 4/10, which will also feature a performance by Cut Hands. Tickets for that show are still available, as are tix for the next two nights in Philly and Boston.

Much sooner than the Godflesh tour, you can catch Pharmakon at Baby's All Right on February 18 with Helm, Damien Dubrovnik (the risqué synth/power electronics project featuring Loke Rahbek of Var, Sexdrome and Lust for Youth), and Three Legged Race. Tickets for that show are on sale now.

Pharmakon's forged an alliance with the Posh Isolation world, it seems, and will be touring Japan with Var, Lust for Youth and Croatian Amor. Those will be cool shows--Japanese readers, get on it.

All dates are listed, along with a song stream, below...