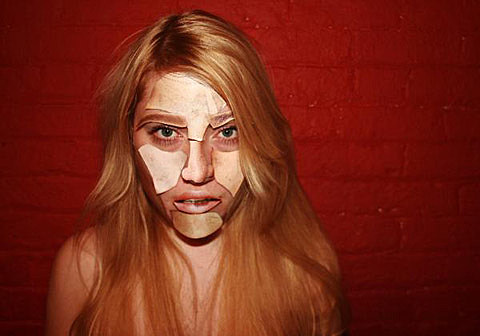 Pharmakon will release Abandon, Margaret Chardiet's debut effort with Sacred Bones and first long-player overall. Look for it on May 14th via the label, but first check out the new track "Crawling On Bruised Knees" available for streaming below..

Chardiet's noisy, confrontational and abrasive live show is a must see, and you can catch her at a trio of upcoming NYC shows including, most imminently, the previously discussed April 7th date at 285 Kent with Jason Lescalleet and Spencer Yeh Trio (tickets) and at another show at 285 Kent on June 15th with Marshstepper, Body of Light, Lust For Youth and Foreplay as part of the Northside Festival. Ticketing info for that one is on the way, or get in with your Northside Festival badge.

Pharmakon also has one other NYC date, as part of the upcoming Red Bull Music Academy series of events, and it's a whopper:

On May 2, the Red Bull Music Academy will turn the spectacular Knockdown Center into a temple of thundering noise with some of today's most daring sound artists for Drone Activity In Progress. The night will see performances from sixteen solo artists and duos on three stages, where the sound bleed between stages is entirely intentional.

All other dates and that stream is below.