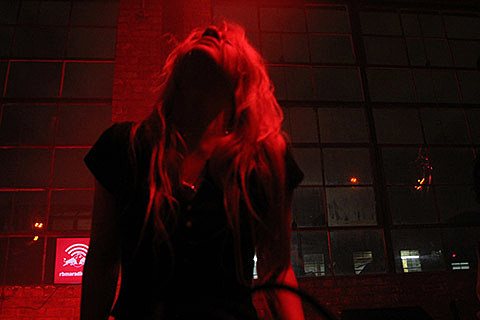 Pharmakon is streaming "Body Betrays Itself" off of her forthcoming album Bestial Burden, the followup to her critically acclaimed 2013 debut Abandon. The song's a good one -- it pulses ominously along with Temple of Doom drums, while  one-woman force Margaret Chardaret screams and wails over top. You can listen to it below. If you want to hear more, the album is out on Sacred Bones on October 14.

As we've mentioned, Pharmakon is touring Europe with Swans (again!) this fall. She was also scheduled to play an NYC show at Death By Audio on August 29 with Una Bestia and La Misma, but she's since had to drop off -- she's traveling to China for a couple dates with Liars, including Bejiing's Modern Sky Festival (which is getting a NYC edition) -- so NYC fans will have to wait.

Pharmakon recently sat down with Pitchfork to talk about the new album--head over there to read their Q&A. Otherwise, all tour dates are listed, along with the new song stream, below...