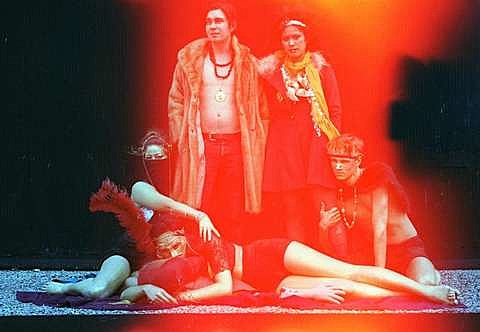 When you think of Monte Carlo, Monaco you may think of old James Bond movies or Grace Kelly but probably not experimental indie groups. Yet that is where Phédre are from, apparently. So says the press release at least, but actually it's members of Doldrums and Hooded Fang. Toronto has often been called the Monte Carlo of Canada, don't you know. The trio released their self-titled debut last month via Daps Records and it's a gauzy mix of '80s synthpop and gothy post punk (and some '60s pop too) as filtered through some old VHS collection.

Phédre make their U.S. debut at NYC club Mercury Lounge this Saturday (6/9) and tickets are still available. Phédre will also play NXNE in Toronto next week and then will be back in North America in the fall, opening some of the dates on Ariel Pink's fall tour (not Webster Hall). All Phédre tour dates are listed below.

In addition to their own material, Phedre do some remix work as well and you can check out their take on Beta Frontiers' "Hondo" at the bottom of this post. You can also stream their album below.