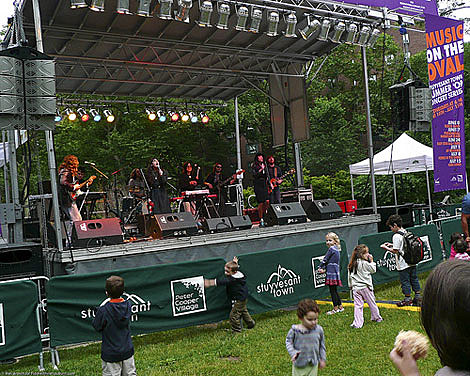 The above scene was photographed during the June 17th Phenomenal Handclap Band show in Stuvesant Town, part of the 2009 Music on the Oval series of free shows at the apartment complex. I seriously can't wait for the Jay Reatard show there on July 1st. Last night (June 24) was the Easy All Stars show. Forro in the Dark and Kaki King also have shows coming up there. Jay Reatard will also play Music Hall of Williamsburg while he is here.

If you needed another chance to see the Phenomenal Handclap Band this summer, they've just been added to the bill of the Friendly Fires show happening at LPR on August 12th. Tickets are on still sale. Friendly Fires will also play Music Hall of Williamsburg during that trip.

Or, you can catch PHB tonight (6/25) at Santos Party House. It's the band's album release party, and the venue is also hosting the bi-weekly Adult Swim Summer at Santos party with Jon Glaser, Cheeseburger, A.C. Newman and The Pontani Sisters. The Adult Swim part is totally free, and we have two pairs of tickets to give away to the PHB part. Details of that contest, along with videos from the Stuy Town show, below...

The Phenomenal BandHandclap Band - 15 To 20

TO WIN TIX TO SANTOS TONIGHT: email BVCONTESTS@HOTMAIL.COM (subject: Handclap). Include your first and last name. Two winners will be chosen randomly, contacted and placed on guestlist.