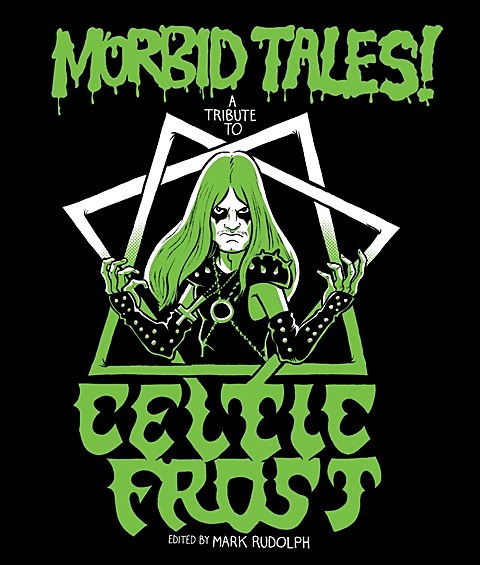 Two very busy heavy music acts, Phil Anselmo and Child Bite have managed to find time to record a cover of Celtic Frost's classic To Mega Therion track "The Usurper." The cover is from an upcoming Celtic Frost tribute compilation called Morbid Tales! (what a title). It's about as weird as you would expect from this combination. It's got Child Bite's hardcore take on the material, but it features some seriously bizarre vocal mixing choices that place this squarely in the realm of "music that sounds like it was recorded for an Adult Swim show." Which is basically what I would hope for and imagine if I heard that Child Bite and Phil Anselmo were covering a Celtic Frost song.

The rest of the tribute album features bands like Acid Witch, Municipal Waste, Hayward ft Scott Kelly and Jason Roeder of Neurosis, and many others. You can pre-order the vinyl over at Corpse Flower records. The LP is being released in conjunction with an illustrated tribute book about Celtic Frost, which features writing from even more significant metal people like the aforementioned Scott Kelly, Tomas Lindberg (At the Gates), Ivar Bjornson (Enslaved), Shane Embury (Napalm Death), Joel Grind, Fenriz, Attila Csihar, and others. You can pre-order that at the same site.

As noted, both Child Bite and Phil Anselmo are very busy. Both will be playing Anselmo's Housecore Horror Fest, and then Child Bite are touring with both KEN mode and Negative Approach, both of which will take them through NYC for shows at The Acheron on 10/9 and 11/29, respectively (tickets).

Anselmo will be playing Housecore with his band Superjoint, who are also going on tour with Danzig, including a stop at the newly-christened Playstation Theater on 10/21 (tickets). Anselmo's also started a new band called Scour with members of Pig Destroyer and Cattle Decapitation.

Meanwhile, Danzig's "Blackest of the Black" tour is underway, and Danzig apparently delivered a set that was both "cordial" and "ferocious" at Stubb's in Austin during ACL weekend"

For a certain portion of Austinites, Danzig front man Glenn Danzig will forever be associated with his 2011 debacle at Fun Fun Fun Fest, where he threw what has been described as the mother of all rock star tantrums, taking the stage close to an hour late and trying to incite a riot when his set was cut short by the fest's noise curfew.

He's been back to Austin at least once since then without incident and on Monday night could not have been more cordial - there's a weird adjective for a metal singer - or professional for the 90 thunderous minutes he and his three-piece backing band were on stage.

The beginning of that set started a bit shaky, as the singer's vocals sounded weak on opening songs such as "SkinCarver" and "Hammer Of The Gods." This was worrying since Danzig's bellowing screams are pretty much the main attraction live, though the blazing guitar work of longtime band guitarist and Prong member Tommy Victor was superb throughout.

Somewhere around the 15-minute mark, however, the singer found his voice and was a peak performer for the duration, leaning into the lines of "How The Gods Kill" and covers of Elvis Presley and Black Sabbath tunes that are part of the band's forthcoming "Skeletons" covers album. [Austin 360]

Skeletons is out on November 27 on Evilive and in addition to Elvis and Sabbath covers, will feature songs by Aerosmith, ZZ Top, and the Everly Brothers, among others.

Check out that Celtic Frost cover, some of those Danzig covers (recorded live), and all dates for Child Bite, below...