photo: Phil Anselmo w/ Down at the 2014 Moorhead Cruise (more by Dana Distortion) 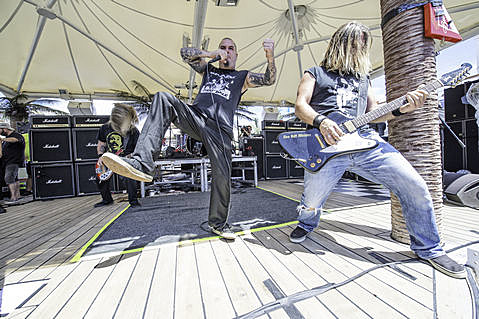 Another day, another metal supergroup is formed. Legendary New Orleans metal figurehead Phil Anselmo will be joining forces with Jesse Schobel of Strong Intention, John Jarvis (who recently joined as the bassist for not one but two Scott Hull grindcore bands, Pig Destroyer and Agoraphobic Nosebleed), Derek Engemann of Cattle Decapitation, and Chase Fraser of Animosity to form Scour.

Anselmo discussed Scour in an interview with hellbound.ca which, like all Anselmo interviews, is very much worth a read. He mentions that he has an unnamed, unreleased death metal album recorded and describes Scour as "modern-ish black metal-sounding"

Meanwhile, Anselmo's Housecore Festival is coming up in November, and his band Superjoint will be playing, along with Agoraphobic Nosebleed. Superjoint are also touring with Danzig, and they'll be playing a couple other shows before that tour kicks off too.

Check out a video of Phil Anselmo giving a drunk interview, along with all upcoming Superjoint dates, below...