photo: Phil w/ Down on the Motorhead Cruise in 2014 (more by Dana (Distortion) Yavin) 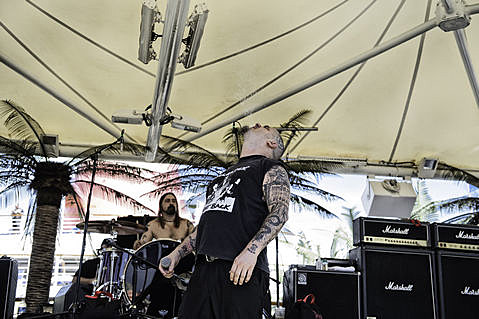 Phil Anselmo remains up to all kinds of stuff, and hot on the heels of touring with Danzig, covering Celtic Frost, and throwing Housecore Festival in San Antonio, he's announced a new death metal band that he mentioned while talking about his other new band Scour. Said death metal project is called Metatron Nganga and it also features Superjoint's Joey Gonzalez on drums, and apparently they have a bunch of stuff recorded. Hellbound's Jay Gorania says:

I'm not exactly sure what the hell that band name means, but I can assure you that the band is worth listening to if you enjoy dark, heavy music... The songs are mysterious, dark, and, from my vantage point, they are not far removed from the spirit of old Immolation and Incantation, or even Mexico's Shub Niggurath. Metraton Nganga sounds bleak and ominous, evoking the same feelings one might have while hallucinating and staring at some dark illustrations by the likes of Hieronymus Bosch or William Blake. It's thunderous, yet it has a distant, detached dream-like quality. It will be interesting to see how this band develops.

That's all we know for now, but stay tuned to find out more. Also, Phil is working on a new Phillip H. Anselmo and the Illegals album because of course he's not just focusing on one band.

In related news, videos recently surfaced of Superjoint's set at Housecore (via Blabbermouth). Check them out below...