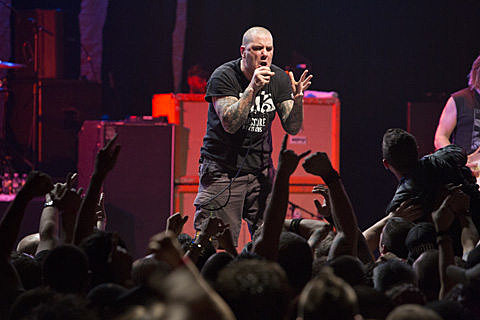 With all of the many many projects that Phil Anselmo has been involved in over the years (Down, Pantera, Superjoint Ritual, Arson Anthem, etc), its not entirely shocking to hear that the vocalist/guitarist/songwriter has taken on another . His latest, called Philip Anselmo & The Illegals, is being billed as his first "solo" venture, despite writing all of the music on the first Viking Crown EP. The band is preparing to release their new record, Walk Through Exits Only, via his own Housecore Records, for a July 16 blast off. Stream a new track below.

As discussed at InvisibleOranges, the release of new material also comes packaged with live dates dubbed "Technicians of Distortion" tour, where the band will be joined by perennial tourmates/Housecore bros Warbeast and most interstingly, the great industrial/metal oddity Author & Punisher! Look for the tour to hit NYC on August 16 at Best Buy Theater. Tickets go on sale Friday (5/24) at noon.

As discussed at InvisibleOranges, Author & Punisher are readying the new LP, Women & Children, released on June 11. Stream that title track below.

And, as mentioned, Anselmo & Co will also play Austin, TX with Goblin soon too.

All other tour dates are listed, along with that song stream, below.