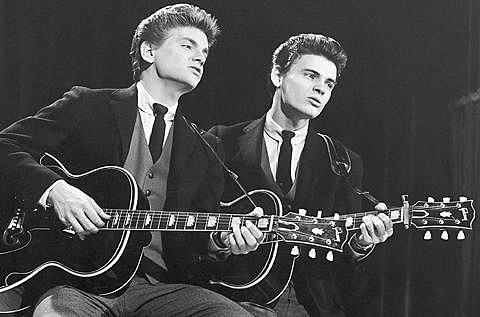 Rock n' Roll lost one its original greats today, Phil Everly, one half of legendary duo The Everly Brothers, who died of complications from chronic obstructive pulmonary disease. He was 74. He and his brother Don created a distinctive close harmony style with '50s staples like "Bye Bye Love," "Wake Up Little Susie," "All I Have to Do Is Dream." All three of those hits were penned by another duo -- Boudleaux and Felice Bryant -- but Phil and Don could write too, like on what is arguably their greatest song, "Cathy's Clown."

The Everly Brothers were also one of the few of rock n' roll's first wave to continue successfully into '60s, and stuck together till 1973 at which time Phil released his first solo album, Star Spangled Springer. They patched things up a decade later and continued to play together since. Their influence is hard to overestimate. Rest in peace, Phil.

Some streams and videos of Everly Brothers classics below...