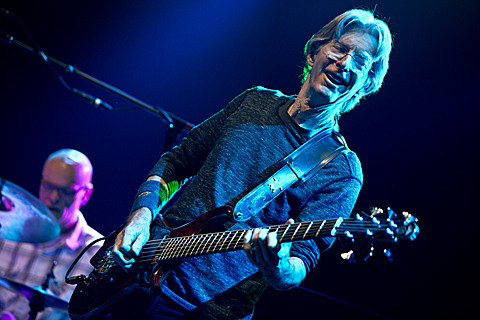 The Grateful Dead's Phil Lesh recently announced his 76th birthday shows which happen at the Capitol Theatre on March 17 and 18. Those both sold out, but now he added a third show for March 15 at the Cap. Like the other two, his band for this one is "The Q" but the lineup for 3/15 differs slightly. It's with Warren Haynes, Eric Krasno, Rob Barraco and John Molo. (The other shows have Jimmy Herring instead of Eric Krasno.) Tickets go on sale Saturday (2/27) at noon and promo tickets go on sale Thursday (2/25) at noon.

As you may know, the Cap is booked by Peter Shapiro who also books Brooklyn Bowl, which has many Dead-related shows coming up (as usual). There's Half Step: Grateful Dead Tribute, Melvin Seals and JGB, The Jerry Dance Party, Grateful Rockers for Kids, Joe Russo's Almost Dead, Old Soul Revival - An Evening of The Allman Brothers Band meets The Grateful Dead, and Dead On Live.

Watch a video of Phil Lesh with Warren Haynes, John Molo and more at Mountain Jam 2007, below...