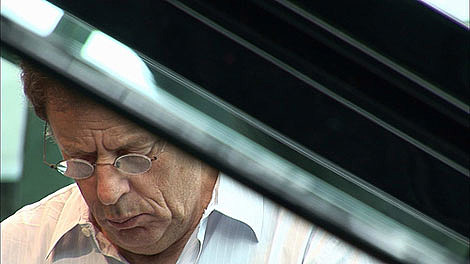 Master storyteller Ira Glass took to the stage with illustrious composer Philip Glass at St. Ann's Warehouse on Tuesday [April 18th] for an intimate evening of music and conversation. In a time when little is for certain at most not-for-profit institutions, the success of the "Glass on Glass" benefit has ensured the theater's next season.

Ira Glass, host and producer of public radio show "This American Life," asked questions of Philip Glass, who alternately riffed on a gleaming Yamaha and answered Ira's questions about the method and processes that lead to his great musical successes.

To hear him explain it, though, Philip's work is not particularly innovative, nor necessarily 'new.' His compositions flow from natural, simple chord experimentation, he said, as he challenges himself to answer questions such as 'How do you achieve coherency without formality?' or 'How do you make it sound as if you have three hands?'

Ira asked if Philip might play one of his shorter pieces -- a prelude, for example. After illustrating the chord structure he said lightly, "I assure you, there is nothing else in the piece. But it'll take me six minutes to convince you of that." [Brooklyn Eagle]

On top of his speaking events, there are also a number of upcoming chances to catch Philip Glass' music. One of the best is Signal's performance of Glass' Symphony No. 3 and Suite from The Hours, with pianist Michael Riesman and conductor Brad Lubman, at Le Poisson Rouge on Sunday, May 17th. Tickets are still on sale.

New work by Glass will be showcased at the opening celebration/benefit for the 2009 World Science Festival at Alice Tully Hall on Wednesday, June 10th.

The evening's festivities will include the New York premiere of "LIFE: A Journey Through Time"--a moving and majestic concert piece, specially adapted for the World Science Festival, setting the lyrical imagery of National Geographic photographer Frans Lanting to an original score by the renowned composer Philip Glass, and performed by the Orchestra of St. Luke's under the baton of acclaimed conductor Marin Alsop.

At the same venue, on Saturday, July 25th, pianists Dennis Russell Davies and Maki Namekawa will perform the US and North American premiere of Glass' Four Movements for Two Pianos, as part of this year's Lincoln Center Festival. Also on the program for that is "the New York premiere of Chen Yi's China West Suite, as well as four hand piano versions of contemporary works by Stravinsky and Steve Reich." Tickets are on sale.

Finally, if "free" is more your price range, the Public Theater's Shakespeare in the Park is presenting The Bacchae by Euripides, featuring a score by Philip Glass, from August 11th - 30th.

This visionary interpretation, featuring a lush choral score by Philip Glass, re-imagines the classic story about what happens when a government attempts to outlaw desire.

Reserved seats are available for those who'd like to become "summer supporters" of the free performances. Info on how to get free tickets below. The shows will be held at the Delacorte Theater in Central Park.

More information on Shakespeare in the park and the Jewel Heart benefit, plus videos of Glass' Symphony No.3 and The Hours and a clips of the other Glass on The Colbert Report, below...

Philip Glass "Symph.nr 3" and talking about...

Shakespeare in the Park ticket info

Get FREE TICKETS to Shakespeare in the Park beginning June 10!

Please note: The Public Theater will not be distributing tickets downtown at 425 Lafayette Street.

IN CENTRAL PARK FREE tickets to Shakespeare in the Park are distributed on the day of the performance beginning at 1PM at The Delacorte Theater in Central Park. The closest entrances to the Delacorte are at 81st Street and Central Park West or 79th Street and Fifth Avenue. There is a limit of 2 tickets per person. Please check back in late-May for more information!

ONLINE While the majority of free tickets for Shakespeare in the Park are distributed via the free line at the Delacorte Theater, a limited number of tickets will be available the day of each performance online beginning June 10. People are chosen at random, not in the order requests are received. Check back in late-May for more information!

Join Gelek Rimpoche, Philip Glass, Francesco Clemente, and Michael Imperioli in a discussion of art, music, drama and meditation and understanding the creative act through the prism of spirituality. There is no greater act of creativity than art except in a spiritual practice in which an entirely new reality is imagined and actualized. This is a rare chance to hear four great artists debate the relevance of art and spirituality to our difficult times.

Gelek Rimpoche was recognized as an incarnate lama at the age of four and was trained by many of the same masters who taught the Dalai Lama. Among the last generation of lamas educated in Drepung Monastery before the Communist Chinese invasion of Tibet, Gelek Rimpoche fled to India and eventually became an American citizen. In 1988, he founded Jewel Heart. He is the author of Good Life, Good Death and The Tara Box.

Philip Glass' landmark operas (Einstein on the Beach, Satyagraha) broke new ground and his film scores (Kundun, The Hours, Notes on a Scandal, The Truman Show) were Academy-Award and Golden Globe nominated. He continues to perform his works with major symphonies around the world. Besides his background in composition, he has been a serious student of Indian Music and Buddhism for over 40 years.

Francesco Clemente's work has been featured in retrospectives at The Guggenheim New York and Bilbao, and his works have been exhibited internationally. He has published many works in conjunction with poets, including John Wieners, Allen Ginsberg, Robert Creeley, and Rene Ricard, and since 1973 he has frequently resided and worked in India.

Michael Imperioli is and actor, writer and director best known for his portrayal of Christopher Moltisanti on the acclaimed HBO series "The Sopranos," for which he won a Best Supporting Actor EMMY Award and was nominated for a GOLDEN GLOBE. He has appeared in more than 30 films including Scorcese's Goodfellas and has worked for more than a decade on the New York stage. He wrote and executive produced Summer of Sam (directed by Spike Lee).