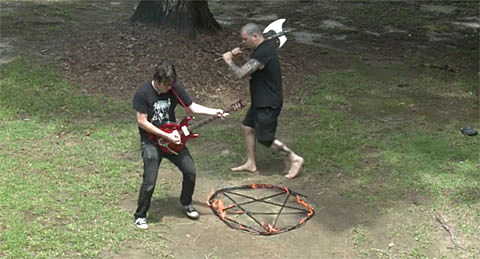 Long in the works, Metal Grasshopper is finally here! Dave Hill (seen recently at a Judas Priest concert) and Phil Anselmo (seen recently in a documentary about New Orleans metal and on a boat with Lemmy) will be posting episodes of their comedy/metal series on YouTube. The first episode is live now! Watch below...

Beginning today and basically threatening to melt your goddamn computer every Tuesday through November 11 comes, Metal Grasshopper, new web series in which comedian Dave Hill travels to the wilds of deepest, dampest Louisiana to get schooled in the ways of heavy metal by legendary frontman Philip H. Anselmo (Down, Pantera, Superjoint Ritual, Philip H. Anselmo and the Illegals, et al).

If you like stuff with corpse paint, burning pentagrams, medieval weaponry, irritable goats rented by the hour, couples counseling, delicious smoothie recipes, and real live chickens, you will love Metal Grasshopper, because it has all that stuff and then a bunch of other awesome stuff on top of that too. Holy sh*t.

Conceived by Hill, Anselmo, and writer/director Chris Lee during a torchlit ceremony in the goddamn woods while it was seriously late at night, Metal Grasshopper begins with Hill showing up unannounced at Anselmo's secret compound somewhere in the sticks outside of New Orleans to learn directly from the master. Anselmo isn't exactly crazy about the idea at first, but after Hill eventually proves he's not messing around, Anselmo reluctantly agrees to take Hill under his heavily tattooed wing, share his unholy wisdom, and let Dave crash in one of the upstairs guest rooms.

Over the course of the series' five episodes, Anselmo educates Hill on everything from headbanging to crowd work to even the most extreme of all breakfast cereals and man, that shit is nuts. Will Hill survive and come out the other end even more metal than before? Or will Anselmo scare Hill straight back to his parents' basement in Cleveland? Guess there's only one way to find out, goddammit. The journey begins TODAY with the exclusive premiere of episode one on Metal Injection, the popular heavy metal-based website on the Internet.

Philip H. Anselmo is best known as the singer for Pantera, Down, Superjoint Ritual, and Philip H. Anselmo And The Illegals and has sold millions of albums worldwide. He is the best at heavy metal. Anselmo owns his own record label, Housecore Records and is the co-founder of the Housecore Horror Film Festival, now in its second exhilarating year. He also has a pet pig named Lucy, which is awesome.

Dave Hill is a comedian, writer, and musician who appears frequently on public radio's This American Life, hosts the Goddamn Dave Hill Show on WFMU, is the author of the book Tasteful Nudes, and has appeared on such TV stations as Comedy Central, HBO, BBC-America, Cinemax, VH1, MTV, and more. He is a pretty sweet guitar player as well and has made out with a lot of chicks.

Chris Lee is a writer, director, and musician. He is the frontman for New Orleans' Supagroup as well as the Chris Lee band. His hair is pretty sweet and goddamn he is handsome.