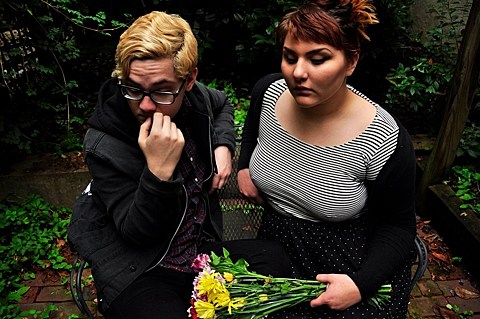 Philly's Kississippi were formed after Zoë Allaire Reynolds and Colin James Kupson met on Tinder in 2014 (true story), and a few months later they dropped the I Can Feel You In My Hair Still EP. This week they'll release its followup, We Have No Future, We're All Doomed, which they recorded with Modern Baseball's Jake Ewald. It comes out on Soft Speak Records and can be pre-ordered here. It's indie rock that has folky qualities but certainly would never be called "folk music," and Zoe's likable voice is no small part of what makes this good. You can check it out for yourself, the full EP stream premieres below.

Kississippi were in NYC earlier this month for a Bronx show with Diet Cig (anyone catch that?) and their only upcoming dates at the moment are in Harrisburg, PA with Tigers Jaw on December 5 and a Philly show the next night.